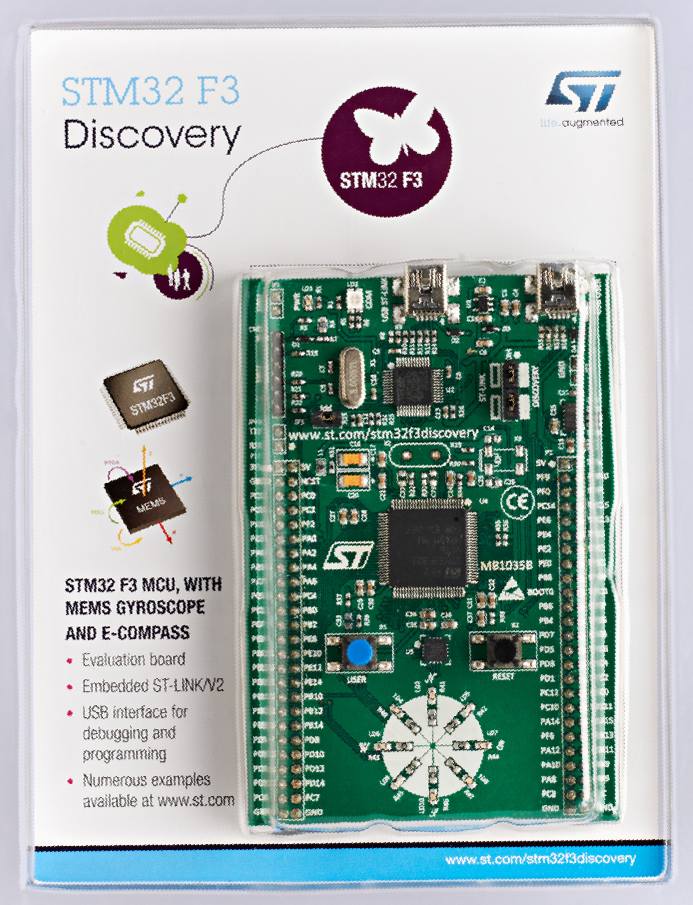 
STMicroelectronics (NYSE: STM), a global semiconductor leader serving customers across the spectrum of electronics applications, has released an innovative easy-access development platform for projects based on its new high-performance STM32 F3 microcontrollers, which are now starting to enter volume production.

“ST’s STM32 F3 microcontroller family and MEMS sensors are powerful products that, when combined, allow our customers to deliver competitively priced new designs offering outstanding performance and features,” said Michel Buffa, General Manager of ST’s Microcontroller Division. “With our leading-edge technologies, developers will be able to pack advanced sensing and embedded processing capabilities into devices as small as a wristwatch.”

The STM32 F3 Discovery Kit contains everything engineers need to start all types of projects using the STM32 F3 microcontroller. The kit includes a ready-to-use prototype board containing an STM32F303 microcontroller and associated chips, as well as indicator LEDs, push-button controls, I/O pin headers, and a USB connection for the host PC. All of the microcontroller pins are brought out to accessible points, which aids testing and debugging. The MEMS devices provided on the board are the L3GD20 3-axis digital gyroscope and LSM303DLHC 6-axis geomagnetic module(2) from ST’s large MEMS portfolio of sensors and iNEMO® inertial modules. The STM32 F3 Discovery Kit is compatible with STM32 software-development environments from leading third-party vendors, including Altium, Atollic, IAR and Keil™.

All STM32 F3 devices announced in June 2012 are starting to enter full production in Q3, including the STM32F30x series as well as the STM32F37x.

The STM32F30x microcontrollers combine the high computational resources of the ARM® Cortex™-M4 processor, which has a Digital Signal Processor (DSP) and Floating-Point Unit (FPU), with advanced peripherals. This is an ideal processor for use with MEMS sensors in high-performance sensor-fusion applications, providing the ability to perform floating-point matrix operations for efficient execution of 3D orientation software such as AHRS algorithms. Designers can take advantage of this efficiency to implement power-saving strategies or to optimize the execution time of the application.

The STM32F37x series delivers a unique blend of peripherals including the first 16-bit Sigma-Delta ADC integrated in an ST microcontroller. Devices in the series feature up to three of these ADCs, providing the basis of a single-chip solution to replace a discrete general-purpose processor and separate ADC for high-precision sensing applications.

In addition to the STM3 F3 Discovery Kit, two different evaluation boards are available that unleash full-feature capabilities of STM32F303 and STM32F373 with a complete ecosystem supporting the new STM32 F3 series. ST and its distribution partners will also begin offering seminars globally to demonstrate the ease of getting started with the STM32 F3.